‘Ilusiontale’ is a performance that explores the opposite concepts of Illusion and Reality based on the use of group interaction and functional sculptural objects that activate sensory and bodily mechanisms in the performers.

The work consists of two procedural instances. The first consists of a phase of experimentation, where performers transform their individual energies, by drawing images, concepts and reflections shared with the artist, to compose a group energy. This is a key aspect as the collective actions executed as a group, trigger unconscious behaviors freeing the control of subjectivities in each individual.

The second instance involves the energy transformation that each of the performers goes through with the use of the sculptural objects that acquire a symbolic meaning depending on who wears them. These elements, designed by Rondolini, become fetishes to the interpreters, as they gather an aesthetic value through its evocative and yet conditioning power.

These functional pieces, are extremely decorative, referring in texture and color, to a Baroque ornamental aesthetic, but created with plaster filling applied on wood, by means of a pastry bag, accentuating its playful and ceremonial character.

In this phase, the interpreters interact with each other and transit a new state of perception from body and sensory mechanisms that are activated through contact, to resignify the concepts proposed by the artist.

The title of the work arises from the union of the terms Illusion and Portal. Ilusion refers to a concept or an image that originates from the imagination or through a deception of the senses, without having a true condition. On the other hand, Portal has been used to describe the passage between two temporary instances “a before and after crossing it”. These same concepts demarcate the two paths that performers transit in this experience where the movements do not respond to a specific indication, but to the connection of each essence that becomes a new element from the communion with both objects, as with others. The performance intends to portray different ways in which the artist reimagines human relations through re-contextualizing objects that embody physical or spiritual changes in the performers.

‘Ilusiontale’ is a performance that explores the opposite concepts of Illusion and Reality based on the use of group interaction and functional sculptural objects that activate sensory and bodily mechanisms in the performers. 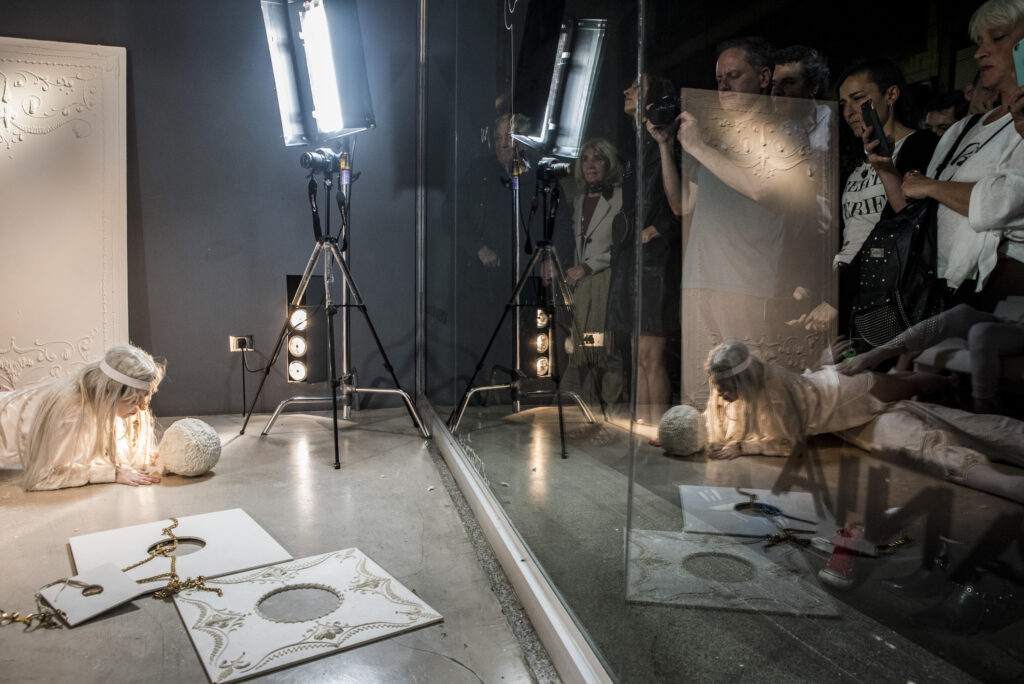